Prosopis juliflora (Spanish: bayahonda blanca, Cuji [Venezuela], Aippia [Wayuunaiki]) is a shrub or small tree in the family Fabaceae, a kind of mesquite. It is native to Mexico, South America and the Caribbean. It has become established as an invasive weed in Africa, Asia, Australia and elsewhere.[2] It is a contributing factor to continuing transmission of malaria, especially during dry periods when sugar sources from native plants are largely unavailable to mosquitoes. 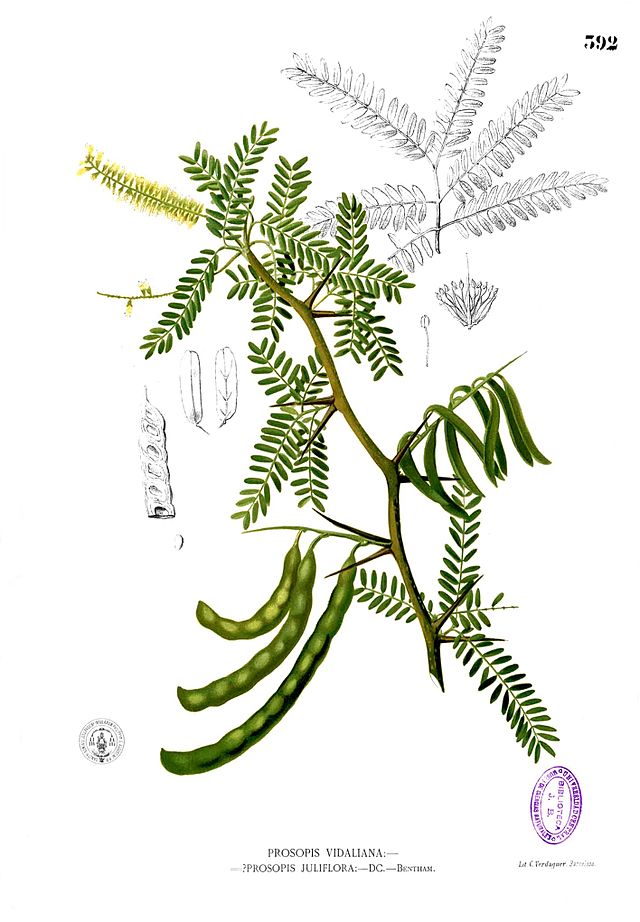 Growing to a height of up to 12 metres (39 ft), P. juliflora has a trunk diameter of up to 1.2 metres (3.9 ft).[4] Its leaves are deciduous, geminate-pinnate, light green, with 12 to 20 leaflets. Flowers appear shortly after leaf development. The flowers are in 5–10 cm long green-yellow cylindrical spikes, which occur in clusters of 2 to 5 at the ends of branches. Pods are 20 to 30 cm long and contain between 10 and 30 seeds per pod. A mature plant can produce hundreds of thousands of seeds. Seeds remain viable for up to 10 years. The tree reproduces solely by way of seeds, not vegetatively. Seeds are spread by cattle and other animals, which consume the seed pods and spread the seeds in their droppings.[5]

Its roots are able to grow to a great depth in search of water: in 1960, they were discovered at a depth of 53 meters (175 feet) at an open-pit mine near Tucson, Arizona,[6][7] putting them among the deepest known roots. The tree is said to have been introduced to Sri Lanka in the 19th century, where it is now known as vanni-andara, or katu andara in Sinhala. It is claimed that P. juliflora existed and was recognised even as a holy tree in ancient India, but this is most likely a confusion with Prosopis cineraria. The tree is believed to have existed in the Vanni and Mannar regions for a long time[citation needed]. This species has thorns in pairs at the nodes. The species has variable thorniness, with nearly thornless individuals appearing occasionally.

In the western extent of its range in Ecuador and Peru, Prosopis juliflora readily hybridises with Prosopis pallida and can be difficult to distinguish from this similar species or their interspecific hybrid strains.[8]

The sweet pods are edible and nutritious. They can be eaten raw, boiled, stored underground, or fermented to make a mildly alcoholic beverage.[9] The species’ uses also include forage, wood and environmental management. The plant possesses an unusual amount of the flavanol (-)-mesquitol in its heartwood.[10]

In the Macará Canton of Ecuador, Prosopis juliflora can be found in dry forests where it is one of the species most frequently harvested for multiple forest products.[11]

Prosopis juliflora has become an invasive weed in several countries where it was introduced. It is considered a noxious invader in Ethiopia, Hawaii, Sri Lanka, Jamaica, Kenya, the Middle East, India, Nigeria, Sudan, Somalia, Senegal and Southern Africa. It is also a major weed in the southwestern United States. It is hard and expensive to remove as the plant can regenerate from the roots.[12]

In Australia, mesquite has colonized more than 800,000 hectares of arable land, having severe economic and environmental impacts. With its thorns and many low branches it forms impenetrable thickets which prevent cattle from accessing watering holes, etc. It also takes over pastoral grasslands and uses scarce water. Livestock which consume excessive amounts of seed pods are poisoned due to neurotoxic alkaloids. It causes land erosion due to the loss of the grasslands that are habitats for native plants and animals. It also provides shelter for feral animals such as pigs and cats.[12]

In the Afar Region in Ethiopia, where the mesquite was introduced in the late 1970s and early 1980s, its aggressive growth leads to a monoculture, denying native plants water and sunlight, and not providing food for native animals and cattle. The regional government with the non-governmental organisation FARM-Africa are looking for ways to commercialize the tree’s wood, but pastoralists who call it the “Devil Tree” insist that P. juliflora be eradicated.[13]

In Sri Lanka this mesquite was planted in the 1950s near Hambantota as a shade and erosion control tree. It then invaded the grasslands in and around Hambantota and the Bundala National Park, causing similar problems as in Australia and Ethiopia.[5] This mesquite Prosopis juliflora native to Central and South America, is also known as katu andara. It was introduced in 1880 and has become a serious problem as an invasive species.[14]

Prosopis juliflora has a wide range of vernacular names, although no widely used English one except for mesquite, which is used for several species of Prosopis. It is called bayahonda blanca in Spanish, bayarone Français in French, and bayawonn in Creole. Other similar names are also used, including bayahonde, bayahonda and bayarone, but these may also refer to any other Neotropical member of the genus Prosopis. The tree is known by a range of other names in various parts of the world, including algarrobe, cambrón, cashaw, épinard, mesquite, mostrenco, or mathenge.[15] Many of the less-specific names are because over large parts of its range, it is the most familiar and common species of Prosopis, and thus to locals simply “the” bayahonde, algarrobe, etc. “Velvet mesquite” is sometimes given as an English name, but properly refers to a different species, Prosopis velutina.[4]

Names in and around Indian Subcontinent, where the species is widely used for firewood and to make barriers, often compare it to similar trees and note its introduced status; thus in Hindi it is called angaraji babul, Kabuli kikar, vilayati babul, vilayati khejra or vilayati kikar. The angaraji and vilayati names mean they were introduced by Europeans, while Kabuli kikar (or keekar) means “Kabul acacia”; babul specifically refers to Acacia nilotica and khejra (or khejri) to Prosopis cineraria, both of which are native to South Asia. In Gujarati it is called gando baval (ગાંડો બાવળ) and in Marwari, baavlia. In Karnataka, in Kannada it is known as Ballaari Jaali meaning “Jaali”, local name, abundant in and around Bellary district. In Tamil Nadu, in Tamil language it is known as seemai karuvel (சீமைக்கருவேலை), which can be transliterated as (சீமை) foreign (or non-native) (கரு) “black” (வேலி) “fence”. Another Tamil name is velikathan (வேலிகாத்தான்), from veli (வேலி) “fence” and kathan (காத்தான்) “protector”, for its use to make spiny barriers. In Andhra Pradesh and Telangana, in the Telugu language it is known as mulla tumma (ముల్ల తుమ్మ) or sarkar tumma or “chilla chettu” or “Japan Tumma Chettu” or “Seema Jaali”. A vernacular. The Somali name is ‘Garan-waa’ which means ‘the unknown’. In the Wayuu language, spoken on the La Guajira Peninsula in northern Colombia and Venezuela, it is called trupillo or turpío.[16] In Kenya it is called Mathenge.

This plant has been described under a number of now-invalid scientific names:[2]

Prosopis chilensis was sometimes considered to belong here too, but it is usually considered a good species these days.[4] Several other authors misapplied P. chilensis to Honey Mesquite (P. glandulosa).